The best lapis lazuli is found in limestone in the Kokcha River valley of Badakhshan province in northeastern Afghanistan , and these deposits in the mines of Sar-e-Sang have been worked for more than 6,000 years. Afghanistan was the source of lapis for the ancient Egyptian and Mesopotamian civilizations, as well as the later Greek and Roman; during the height of the Indus valley civilization about 2000 B.C. , the Harappan colony now known as Shortugai was established near the lapis mines.

In addition to the Afghan deposits, lapis has been extracted for years in the Andes near Ovalle , Chile , where the deep blue stones compete in quality with those from Afghanistan. Other less important sources include the Lake Baikal region of Russia , Siberia , Angola, Burma , Pakistan , USA (California and Colorado ), Canada and India .
In ancient Egypt lapis lazuli was a favorite stone for amulets and ornaments such as scarabs ; it was also used by the Assyrians and Babylonians for seals . Lapis jewelry has been found at excavations of the Predynastic Egyptian site Naqada (3300–3100 BC), and powdered lapis was used as eyeshadow by Cleopatra .
As inscribed in the 140th chapter of the Egyptian Book of the Dead , lapis lazuli, in the shape of an eye set in gold, was considered an amulet of great power. On the last day of the month, an offering was made before this symbolic eye, for it was believed that, on that day, the supreme being placed such an image on his head.
The ancient royal Sumerian tombs of Ur, located near the Euphrates River in lower Iraq, contained more than 6000 beautifully executed lapis lazuli statuettes of birds, deer, and rodents as well as dishes, beads, and cylinder seals. These carved artifacts undoubtedly came from material mined in Badakhshan in northern Afghanistan . Much Sumerian and Akkadian poetry makes reference to lapis lazuli as a gem befitting royal splendor.[citation needed ]
In ancient times, lapis lazuli was known as sapphire , which is the name that is used today for the blue corundum variety sapphire. It appears to have been the sapphire of ancient writers because Pliny refers to sapphirus as a stone sprinkled with specks of gold. A similar reference can be found in the Hebrew Bible in Job 28:6. The Bible (New Living Translation) also mentions lapis lazuli in Exodus 24:10 where God Himself seems to be standing upon it while on Mount Sinai.

Many of the blues in painting from medieval Illuminated manuscripts to Renaissance panels were derived from lapis lazuli. Ground to a powder and processed to remove impurities and isolate the component lazurite, it forms the pigment ultramarine . This clear, bright blue, which was one of the few available to painters before the 19th century, cost a princely sum. As tempera painting was superseded by the advent of oil paint in the Renaissance, painters found that the brilliance of ultramarine was greatly diminished when it was ground in oil and this, along with its cost, led to a steady decline in usage. Since the synthetic version of ultramarine was discovered in the 19th century (along with other 19th century blues, such as cobalt blue), production and use of the natural variety has almost ceased, though several pigment companies still produce it and some painters are still attracted to its brilliance and its romantic history
Anita Chowdry, David Margulies and Marinita Stiglitz
In his travels Marco Polo vividly described the cold province of Badakhshan, a prosperous land, where horses that descended from Alexander's horse Bucephalus were once bred and where priceless rubies and the finest lapis lazuli were found.
Since ancient times lapis lazuli has been sourced in this remote region, north-east of modern Afghanistan, and exported over vast distances. Its mines, high in the steep Hindu Kush mountains, above the Valley of the Kokcha River, can only be reached through a tortuous and dangerous route. At present only the mines of Sar-e-Sang have reserves of the highest-grade lapis lazuli. Other historical sources are near Lake Baikal in Siberia. The other locations where lapis lazuli can be found in commercial quantities are in the Andes Mountains of Chile and in Colorado, USA. There are smaller deposits on Baffin Island, Canada, in Lazio, Italy, and in the Pamir mountains of Tajikistan.
Before the use of explosives the mining of lapis lazuli involved lighting large fires against the rock and, when the rock was hot, throwing cold water onto it. The sudden cooling caused the rock to crack and split enabling the extraction of the lapis lazuli from the marble matrix with pick, hammer and chisel.
Lapis lazuli consists of a large number of minerals, including the blue mineral lazurite, the white mineral calcite and golden specks of iron pyrites. Samples of this opaque semiprecious stone vary considerably in appearance and quality, from the most prized deep blue pieces sometimes speckled with pyrites to the less desirable pale mottled blue and white pieces.
This valuable commodity, much prized since antiquity, has been used to carve artefacts and jewellery; legend has it that it was powdered as a cosmetic eye shadow favoured by Egyptian women and later employed to make the pigment ultramarine.
A laborious process transforms this composite mineral into the pigment ultramarine; various grades of ultramarine can be obtained, from the purest extremely expensive deep blue to the pale grey, so-called ultramarine ash.

In ancient Egypt lapis lazuli was a favorite stone for amulets and ornaments such as scarabs ; it was also used by the Assyrians and Babylonians for seals . Lapis jewelry has been found at excavations of the Predynastic Egyptian site Naqada (3300–3100 BC), and powdered lapis was used as eyeshadow by Cleopatra.
As inscribed in the 140th chapter of the Egyptian Book of the Dead , lapis lazuli, in the shape of an eye set in gold, was considered an amulet of great power. On the last day of the month, an offering was made before this symbolic eye, for it was believed that, on that day, the supreme being placed such an image on his head.

Grinding and levigating (a term used for the separation of the different particles using water) was sufficient to produce a rich blue pigment from the very high quality mineral.
Being that both crystals and rock are very hard materials, they had to be reduced in size with a hammer before the grinding with pestle and mortar could take place. During the grinding process the distinctive odour of sulphur was produced by the breaking down of the lazurite particles. As the complex mix of minerals is broken down the powder appears to become paler and paler, in part due to the quantity of transparent minerals to be found in lapis lazuli, and partly due to the release of some of the sulphur found in the different minerals. The purified blue pigment extracted from lapis lazuli is essentially the mineral lazurite which is a complex sulphur-containing aluminosilicate.
Whilst grinding with pestle and mortar we noticed that the crystals were relatively soft and brittle and were easier to break compared to the hard lapis lazuli rock. Once a coarse powder was obtained with a granite pestle and mortar grinding continued with a ceramic pestle and mortar adding water to obtain finer particles.
The final grinding with water was done with a polished alabaster pestle and mortar; at this stage the water was poured out leaving the purer heavier particles in the mortar. The resulting pigment was washed several times to purify the lazurite further. The pigment was left to settle in water so that the heavier lazurite particles slowly deposited on the bottom of the vessel while the other components could be poured off with the water, leaving a purer pigment behind. This process was repeated until a rich saturated blue was left at the bottom of the vessel. The batch of pigment obtained from the rock required several further washing before a rich blue could be achieved. 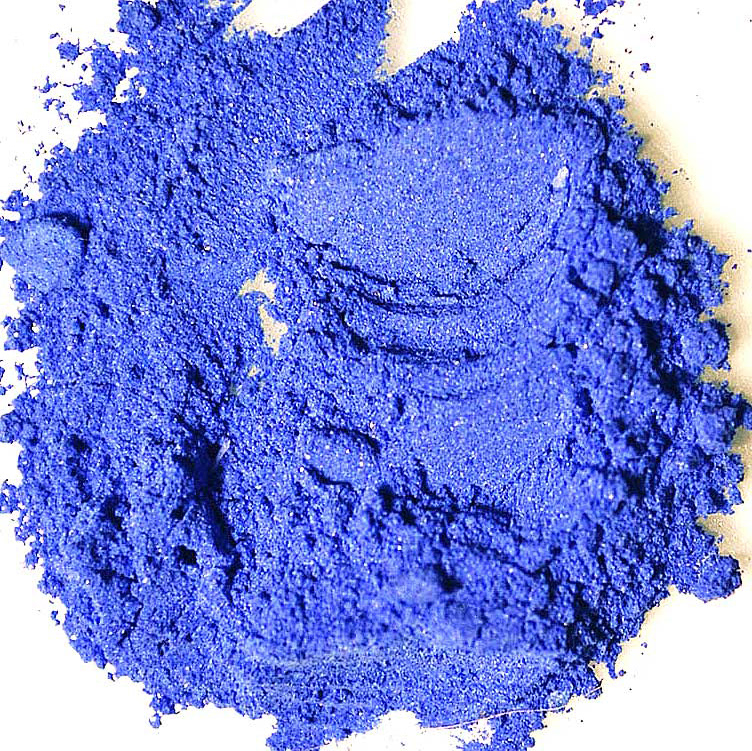 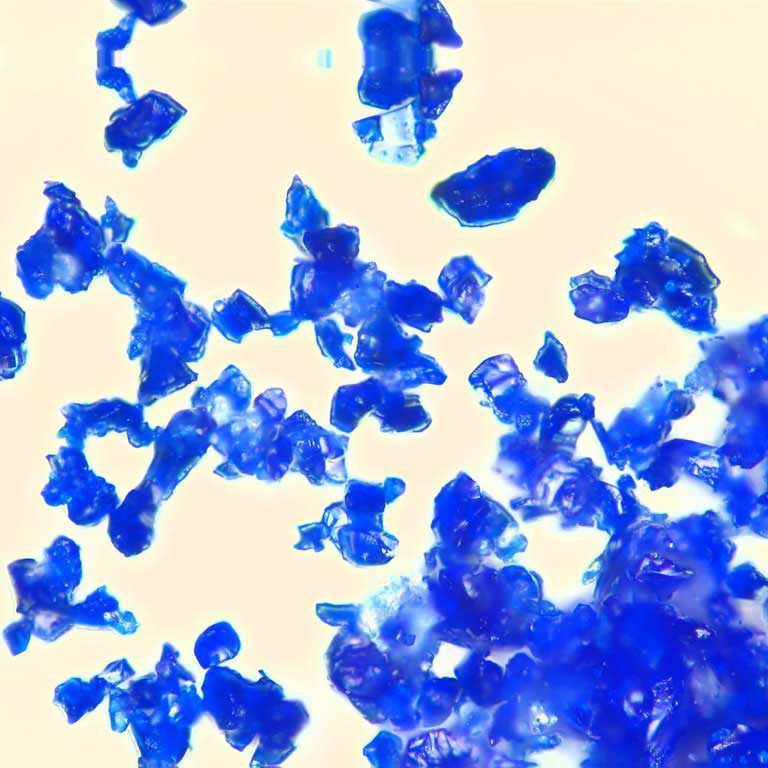 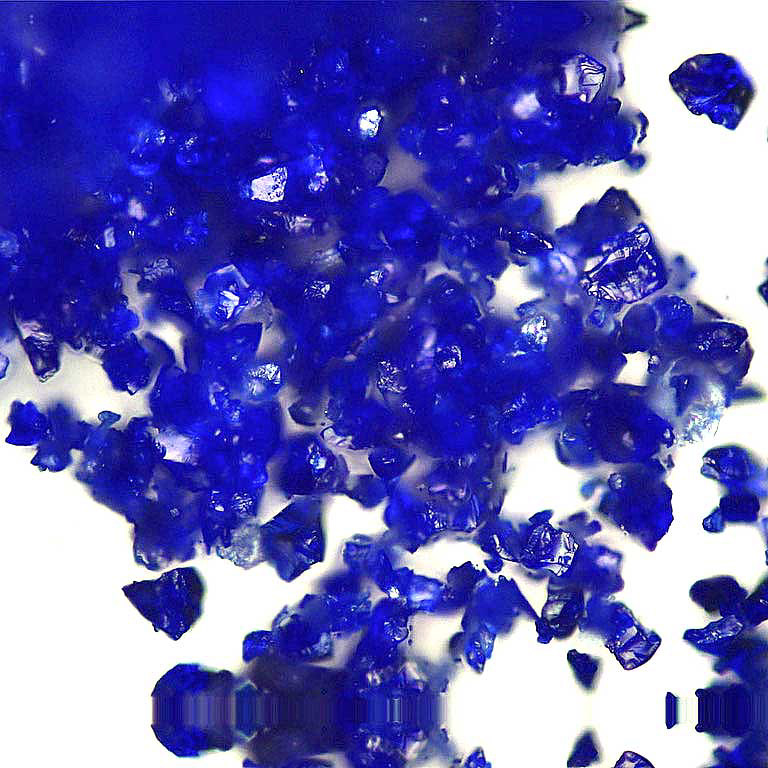 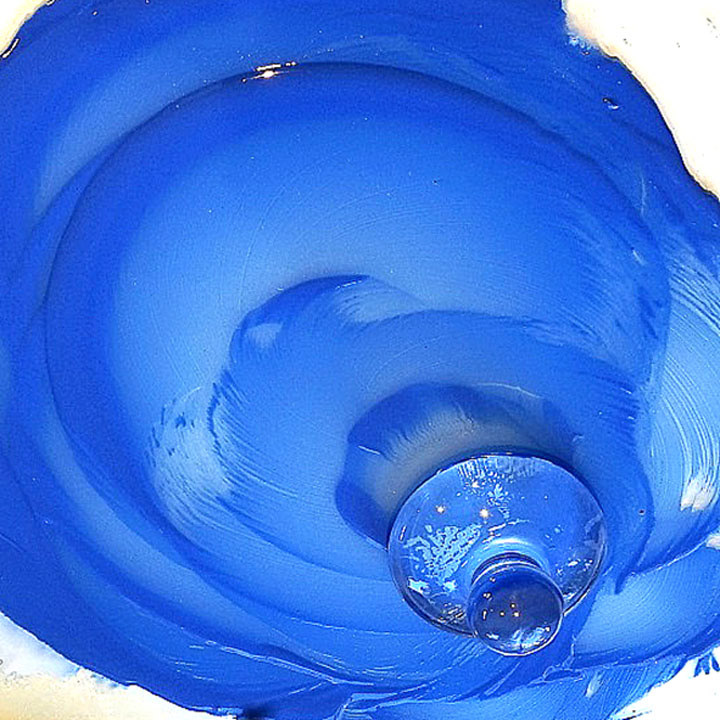 Orpiment
↑Back to Top

We value your privacyWe and our partners use technology such as cookies on our site to personalise content and ads, provide social media features, and analyse our traffic. Click below to consent to the use of this technology across the web. You can change your mind and change your consent choices at anytime by returning to this site. OK Avslå