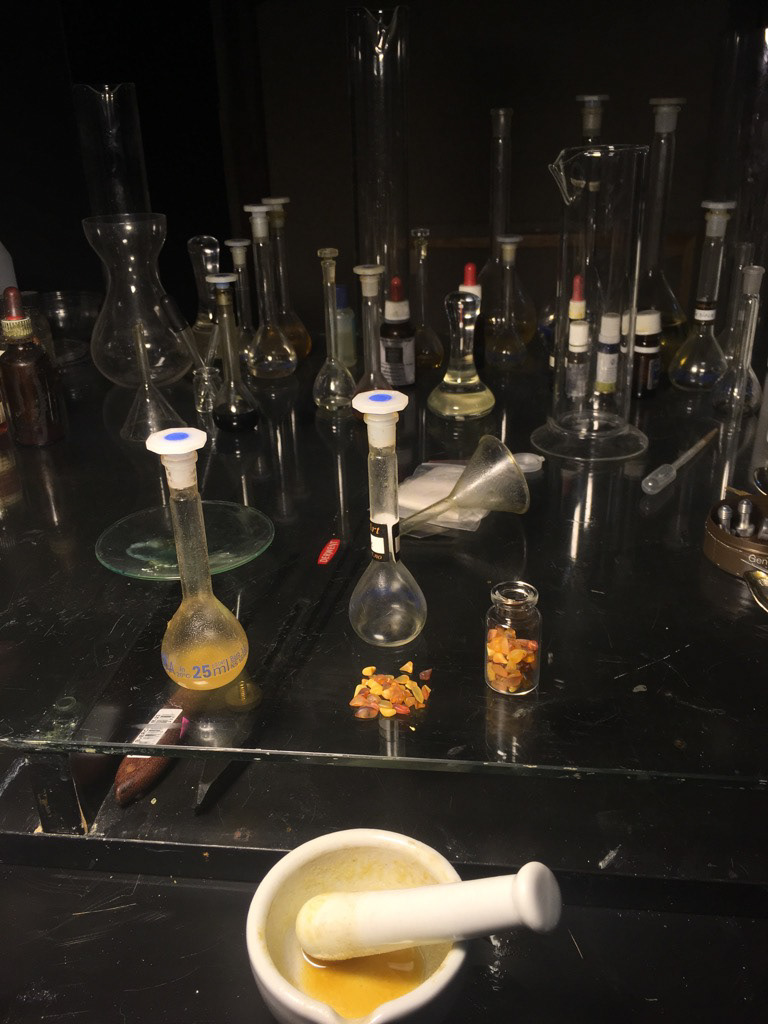 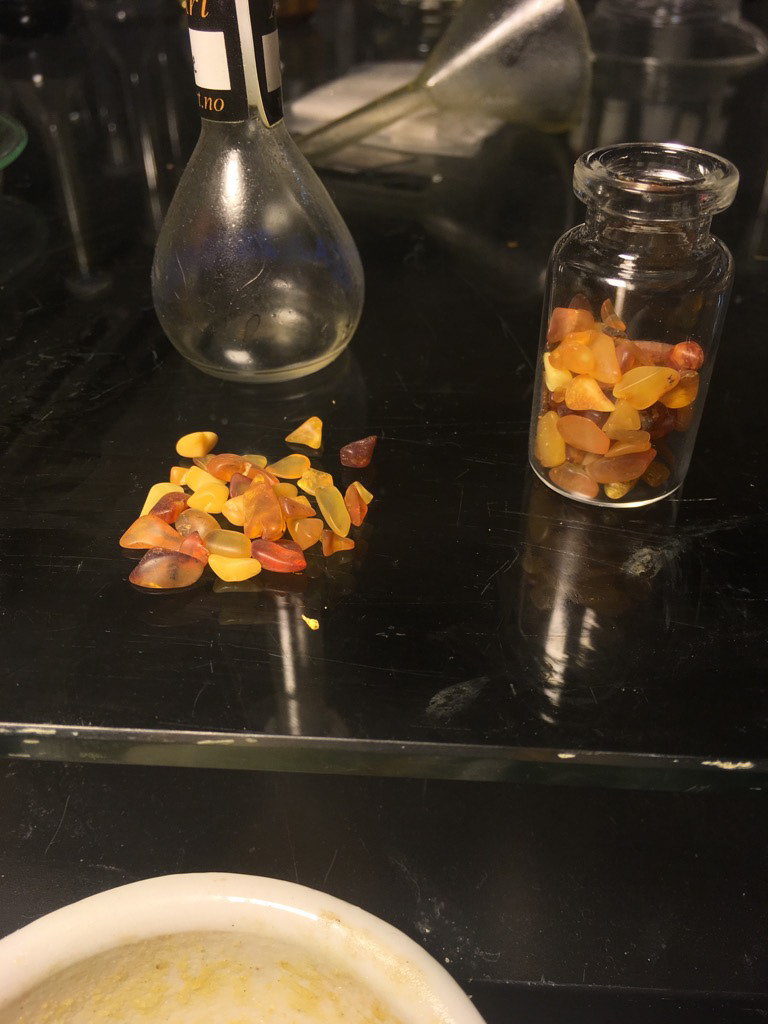 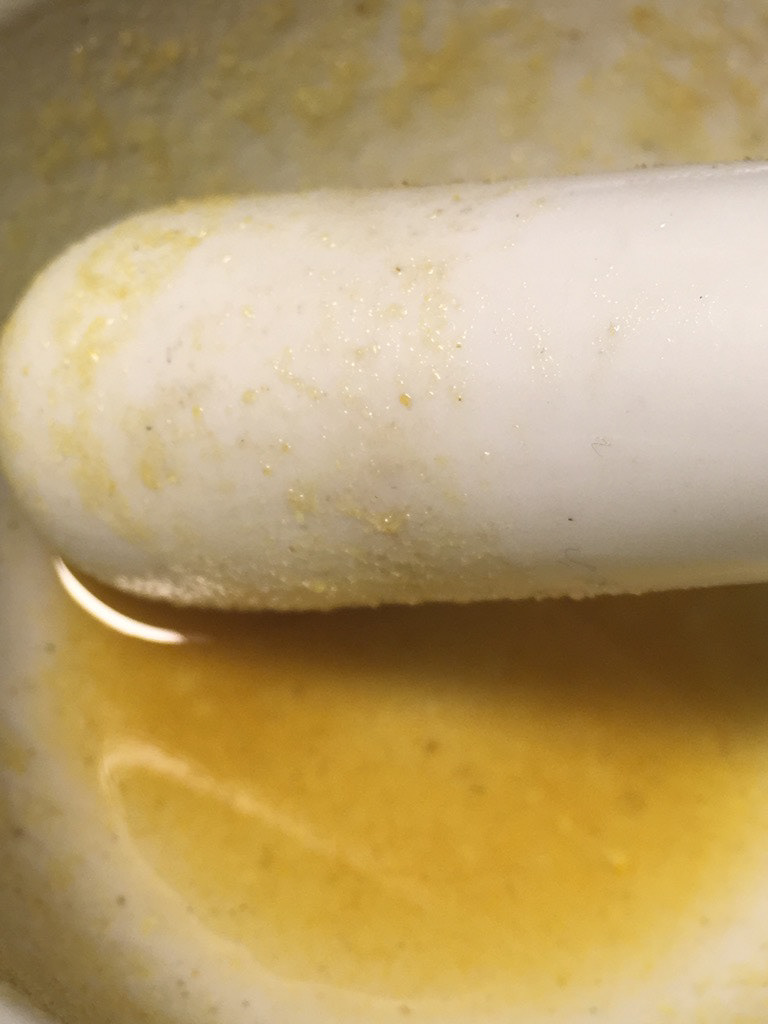 Amber is a mixture of hydrocarbons, composed of several tree resins (mostly of an extinct Pine genus, or in some areas extinct Hymenaea species), plant materials, a volatile oil and succinic acid. Amber is not formed from tree sap, fluid that circulates through a plant’s vascular system, but from resin, an aromatic, semi-solid substance secreted though the plant’s epithelial cells. It is produced as a protection mechanism to draw off disease and injury caused by insects and fungi, heal over broken branches, or to ward off stress produced by rapid growth. As resins of the ancient forests filled internal fissures in the trees, dripped and oozed down the outer bark, they trapped insects, spiders, annelids and other small organisms, pieces of wood and plant matter, feathers and even hair. They then began to harden by losing their volatile components, and over time the forests fell and were carried by rivers to coastal regions where they were buried by sediments and became part of the ocean floor, or were repositioned elsewhere by other geological events.
To become Amber, the fossil resins had to undergo a second hardening period of polymerization, where the molecules linked with each other to form larger molecules, a process which took from several tens of thousands of years to millions of years, before becoming insoluble. Most Amber is 30 to 90 million years old, though some is slightly less than a million, and the oldest Amber found to date is 320 million years old. Copal is a name given to tree resin from the Protium copal tree prominent in the Mesoamerican region, and generally to young tree resins, several hundred to several thousand years old, in an intermediate stage of polymerization and hardening. It has been used for centuries in incense, fine varnishes, and for ceremonial purposes, but is at times misleadingly marketed as “amber” or “young amber.” Resins from Columbia and Madagascar are too young to be considered authentic Amber. Copal can often be identified if it becomes sticky when a drop of organic solvent, such as alcohol or acetone, is applied, or if it shows very little color change under a short-wave UV light. Buyers should beware of faked Amber with perfectly preserved modern insects encased. Over 1000 extinct animal species and various types of plant matter have been identified in Amber, but whole specimens are extraordinarily unique, usually in museums and are quite expensive.
True Amber of lapidary quality comes mainly from the Baltic region, primarily Russia, Poland and Lithuania, with some production in Chiapas in Mexico, the Dominican Republic, Burma, and recently Sumatra in Indonesia. It has a hardness of 2 to 2.5, can be transparent to opaque, and ranges in color from a whitish and pale yellow, to the most common “honey” yellow/orange/brown hues associated with the color “amber,” to a deep brown. Colors such as red, sometimes known as “cherry amber,” and green are rare, and much on the market is heat or pressure-treated. Throughout history, Green Amber was thought to bring immortality and good luck. Blue is considered to be the rarest shade of all and is highly sought after, found mostly in the Dominican Republic and the newly discovered Sumatra mines. It has a strong natural fluorescence under UV light, with an intense blue reflection in sunlight. In antiquity, Blue Amber was preferred by the chief priests, believed to control spirits of air, fire and water, and to get blessings from the gods. Black Amber is not fully fossilized resin, and is actually Jet, a form of lignite coal.

The Healing Energies, Metaphysical Properties, Legendary Uses and Meaning of Amber
Amber is one of the world’s oldest and most coveted treasures, a “Gold of the Sea” intrinsically formed by light and life, preserved by time and washed upon the shores for humanity, a talisman of beauty, protection and renewal. It has been portrayed as drops of the sun, tears of the gods, hardened honey, and sunlight solidified, and is as desired today as it was in the most ancient cultures, utilized as far back as the Stone Age for its pleasing warmth of color, value in adornment, and its magical and medicinal properties.
Amber belongs to a small class of organic gems, neither a crystal nor a mineral, but a biological product of nature, a protective resin that oozed from living trees in dense, prehistoric forests and fossilized over millions of years. It is highly prized in the metaphysical world for its energetic and healing properties, and for the marvelous Life Force it carries. Amber holds a strong connection to the sun and earth, as well as the once living insects, organisms and plant matter that are forever suspended within its golden structure. It attunes to ancient wisdom and can be a powerful tool for past life recall, or for stimulating the remembrance of genetic lessons and experiences passed down from one’s ancestors. It is useful for clearing family patterns, and initiating one’s prerogative of choice.
Amber is a natural purifier, esteemed for its ability to draw pain and dis-ease from the physical body, as well as the mind and spirit, by absorbing negative or stagnant energies and transforming them into clear, positive energy. This stimulates the body’s own mechanisms to heal itself. It increases vitality and aids tissue regeneration. Amber is ideal for cleansing and reactivating the chakras, particularly the Sacral and Solar Plexus Chakras, and is an excellent tool for clearing the environment in which it rests. It emits a bright, soothing energy conducive to health and well-being, and is marvelous for convalescence, ameliorating depression, or working through the grieving process. Amber also provides a protective shield against negative energies and may be called upon to remove toxicity from one’s life or relationships.
From the earliest discoveries of Amber thousands of years ago, washed upon the shores by turbulent seas, this yellow-gold substance was deemed to be beautiful and unique, warm to the touch and light in weight. It carved with little effort, became electrically charged when rubbed, and ignited easily. The rarity of its inclusions and its purported magical and medicinal powers, made it one of the first export goods from the Baltic region to be traded for spices, salt and metals. Prehistoric trade routes were defined by this Amber trade, and the inland corridor from coastal areas of the North and Baltic Seas, down to the Mediterranean Sea became known as the Amber Road. For millennia, this important raw material, dubbed “gold of the north,” was transported overland by way of the Vistula and Dnieper rivers to Italy, Greece, the Black Sea, Syria, Egypt, and beyond.
Amber was associated with the sun, and its droplet shape created a natural link to tears in many Norse, Greek and Lithuanian mythologies. It was considered a gem of the lonely or grieving, and because it so perfectly preserved life, was used to honor the dead in funeral rites and was placed in burial tombs to guard the soul in the afterlife. Amber was traditionally known as a protective stone for children, and throughout history was strung as beads and placed around their neck to keep them from harm, and reduce teething pain. Medicinally it was ground into powder and mixed with water, oil or honey and used as an elixir or made into an ointment for curing deafness and poor eyesight, fever and stomach distress, asthma, gout, rheumatism, wounds and infections, epilepsy and the plaque. When lit, Amber’s smoke was thought to fend off evil spirits and enchantments, and sailors burned it on ships to drive away sea serpents and perils of the deep. As incense, it soothed stress and was believed to filter germs and disinfect an area, commonly used during childbirth.
In antiquity, Amber was known by several names, most notably the Latin succinum, or “juice” from the extinct Pinites succinifer trees from which it was thought to have been originally produced. Pliny the Elder considered its pine origins well-proven by the fact it emitted a pine-like smell when rubbed and when ignited, burned with the odor and appearance of torch-pine wood. The Greek term for Amber was elektron, a word referring to the sun, and conferred upon Amber for its ability to draw small substances to itself when subjected to friction. It is the origin of our words “electron” and “electricity.” The modern name “amber” is thought to come from anbar, the Arabic word for ambergris, a similarly colored material discharged from the sperm whale that also washes onto shores, and is used in making perfumes.

Lead White
↑Back to Top

We value your privacyWe and our partners use technology such as cookies on our site to personalise content and ads, provide social media features, and analyse our traffic. Click below to consent to the use of this technology across the web. You can change your mind and change your consent choices at anytime by returning to this site. OK Avslå